Van drivers are risking crashes by failing to leave enough distance to stop, according to new research that showed more than half did not know the impact that heavy loads had on braking distances. 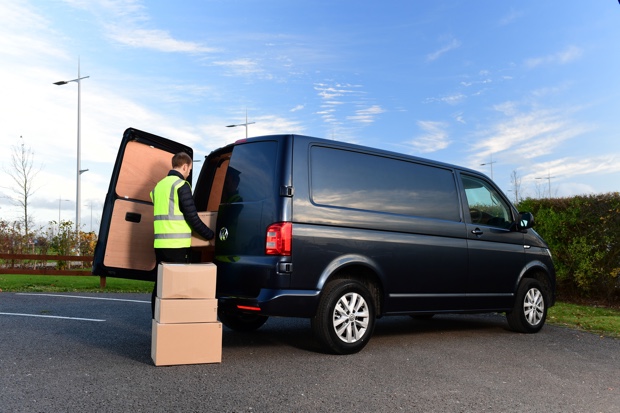 Van drivers are risking crashes by failing to leave enough distance to stop, according to new research that showed more than half did not know the impact that heavy loads had on braking distances.

The majority of vans carry up to half a tonne of equipment on a daily basis, according to a survey of 500 drivers, which could increase braking distances by up to 36% - equal to an extra five metres to stop at 60mph, according to vehicle tests undertaken by Volkswagen Commercial Vehicles.

The brand conducted a series of brake tests at the MIRA Proving Grounds in Nuneaton on its range of vans, with the Caddy, Transporter and Crafter carrying varying weights from empty to 500kg at both 30mph and 60mph.

But research revealed that more than half of van drivers could not identify how much longer it would take to brake when driving a loaded van, while just 17% could correctly identify the Highway Code advised 30mph stopping distances. It states braking distances at 30mph are 14 metres with an additional nine metres of thinking time, meaning it takes an average of 23 metres to stop.

Carl zu Dohna, director of Volkswagen Commercial Vehicles, said: “This research highlights a lack of knowledge that could prove lethal. Braking distances in the Highway Code are based on an advised standard and don’t take into account the loads that many van drivers carry.

“Our research highlights an important safety message that van drivers could really benefit from. Whether they’re plumbers, landscape gardeners or construction workers, our customers regularly carry half a tonne of equipment and need to be aware they need to adjust their driving style to avoid having a costly, and potentially serious, accident.”

Supporting the research, Matthew Avery, director of research at Thatcham Research, the motor insurers’ automotive research centre, said: “We would also encourage van drivers to ensure that loads are well-secured, as movement of heavy items in the rear can also effect stability and stopping distance.”

Volkswagen became the first van manufacturer in 2017 to standard fit Autonomous Emergency Braking (AEB) across its model line-up. It is claimed that if AEB was fitted to all commercial vehicles in the UK the technology had the potential to stop almost 2,500 crashes per year.

As part of our partnership with the AA, we can provide driver training for vans, LGVs, HGVs and other specialist vehicles.