The phrase ‘I've lost my car keys' is set to be consigned to history with Volvo saying it will become the world's first motor manufacturer to offer models without keys from 2017. 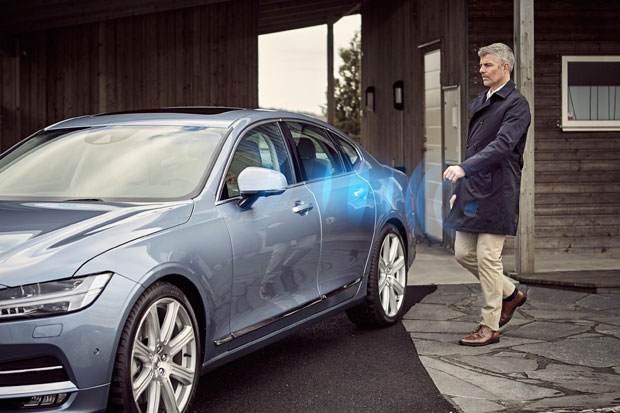 Volvo customers will be offered an application for their mobile phones to replace the physical key with a digital key. It will do everything that a physical key currently does, such as locking or unlocking the doors or the boot and allowing the engine to be started.

The ground-breaking move utilising Bluetooth-enabled digital key technology will also offer customers the possibility to receive more than one digital key on their app, allowing them to access different Volvo cars in different locations - according to their changing mobility needs.

Experts believe that in the future drivers’ motoring habits will change and rather than driving a single car they will become far more flexible in their habits and be willing to use and share different vehicles according to their requirements.

For example, using the app, drivers could potentially book and pay for a rental car anywhere in the world and have the digital car key delivered to their phone immediately. On arrival, a customer could simply locate the rental car via GPS, unlock it and drive away, avoiding frustrating queues at airport or train station car rental desks.

Volvo also says that its digital key means that sharing a car will become both simple and convenient. For example, Volvo drivers will be able to send their digital key to other people via their mobile phones so they can also use the car. That could be family members, friends or co-workers in a company.

Henrik Green, vice president of product strategy and vehicle line management at Volvo Cars, said: ‘Our innovative digital key technology has the potential to completely change how a Volvo can be accessed and shared. Instead of sitting idle in a parking lot the entire day, cars could be used more often and efficiently by whoever the owner wishes.

‘At Volvo, we are not interested in technology for the sake of technology. New technology has to make our customers’ lives easier and save them time. Mobility needs are evolving and so are our customers’ expectation to access cars in an uncomplicated way.’

Volvo unveiled its keyless car technology at the Mobile World Congress 2016 held this week in Barcelona and will pilot this technology in the spring via its car-sharing firm Sunfleet, stationed at Gothenburg Airport.

Volvo says that a limited number of commercially available cars will be equipped with the new digital key technology in 2017.

For decades, drivers have been accustomed to accessing and driving cars with physical keys, but in the future it looks like their only concern will be not losing their smartphone!